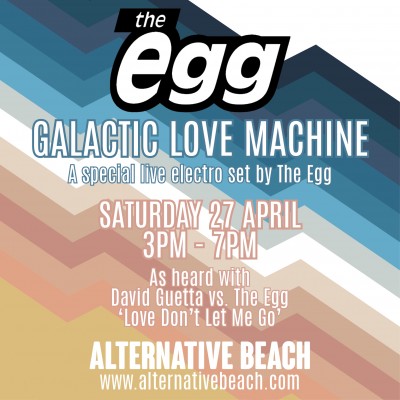 A special electronic set by The Egg at Alternative Beach. As heard with David Guetta vs. The Egg 'Love Don't Let Me Go'.

The band are well known on the UK festival circuit and the club scene, enjoying a worldwide hit with the massive Tocadisco electro-house remix of ‘Walking Away’ and the David Guetta bootleg that followed. (no.3 UK charts, no.1 in Spain 6 weeks), and the biggest selling dance tune in the world.

Head down to Alternative Beach on the 27th of April to check out The Egg. Take in the epic vibes whilst floating on the bean-bags with a cocktail in hand.